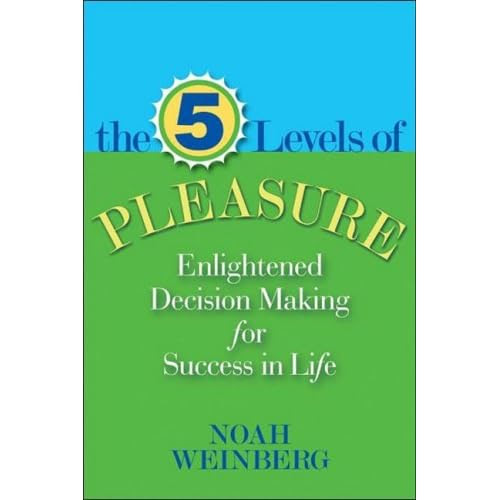 Following up on my previous message about the passing of Rabbi Noah Weinberg, anyone interested in reading some of Rabbi Weinberg's ideas can check out his book titled Five Levels of Pleasure: Enlightened Decision-Making for Success in Life:

In Harry Potter and the Deathly Hallows a lot of people try to talk Harry out of fulfilling the mission that Dumbeldore left him. Aberforth says it most bluntly, but the questions are raised throughout the book. Is it a realistic mission? Can he trust that it's the right mission? Can he trust that he understood the mission correctly? As we know, Harry stuck with it, made the fateful decision after Dobby's death that he was going to persevere, and in the end he was successful.

Last Thursday Rabbi Noah Weinberg died in Jerusalem. I didn't know him, I never met him, I only heard him speak a few times and read very little of his teachings. But from what I've learned and heard from others, and from what I saw on a video that he released a few years ago for Tisha B'Av, I think there's an amazing lesson that we all can learn from him. He was truly a man with a mission. Raised in the religious Yeshiva communities of Baltimore and New York, descendent of a long line of scholars, he had an experience in his youth that shocked him: he talked with Jews who knew nothing of Judaism. He spent the rest of his life, to his last day, establishing schools and adult education centers worldwide to teach Judaism to those who knew nothing about it.

At the time this was radical. The Yeshiva world was fairly insular and most scholarship was very inner-directed. But he was on a mission. He was driven to do everything he could to eliminate Jewish ignorance, eliminate assimilation and inter-marriage, and teach the beauty of Torah to people who had never been exposed to it.

He said of himself that he felt that he had not accomplished enough. The thousands and thousands of Jews that had learned in his institutions, and the entire genre of institutions that he inspired, were not enough as long as assimilation and intermarriage were on the rise. He set the highest standard for himself.

Many people are writing about him and many people are continuing his work in Jewish education. I encourage anyone interested to read the articles about him at http://www.aish.com and other sites on-line. The articles and the web sites all reflect the thoughts and feelings of people that are trying to follow in his footsteps.

But the rest of us can learn a lesson from him that I think is just as important. When we see something that inspires us, that gets us thinking about a mission that needs to be done, we can decide to embark on it. Life missions are not just for Rabbi Weinberg, and (le'havdil) they're not just for Harry, Ron, and Hermione, they're for us as well. If the world needs to be changed, and if we feel the ability and the inspiration to do it, than we can try to make the inspiration a reality.

In this upcoming Shabbat's Torah portion, we read that Moses's father-in-law Yitro (Yisro) heard something that caused him to leave where he was and join the Jewish people. Our sages tell us that he heard of the events of the Exodus from Egypt, that these events inspired him to change around his life.

Interestingly, the same statement by our sages tells us that other great people of the time also heard of the events of the Exodus, but that they were not themselves inspired to join the Jewish people or in any way to react to the events. Yitro had the inspiration and the ability to make the mission a reality, even when other great people could not.

If we can all learn this lesson from Yitro, from Rabbi Weinberg, and from Harry, and can grab onto inspiration and make it a reality, taking on life missions that can change the world or at least our little portion of it, then (G-d willing) Rabbi Noah Weinberg's name will truly be of Blessed Memory.
Posted by Bruce Krulwich at 5:46 AM No comments: